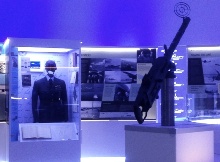 After closing its doors more than half a century ago, Langham Dome reopened on Saturday 19th July, having been transformed into a fun and engaging visitors’ centre. It’s estimated that approximately 300 people flocked to Langham for the official opening ceremony and to get the first look at the new displays. Present were ex-pilot Dr Bert Osborn DFC, who was based at Langham in 1944, and Air Marshal Dick Garwood CB CBE DFC who cut the ceremonial ribbon which declared the Dome open to the public. The sound of aircraft engines were heard over the airfield once again as visitors were treated to a fly-by display by a Spitfire. Crowds gather for the opening The new attraction tells of RAF Langham’s role in the defence of the country in both World War 2 and the Cold War, bringing to life the stories of the brave men and women from all over the globe who served there. These individuals were at the forefront of both attack and defence during the war, some of whom made the ultimate sacrifice. Patrick Allen, Chairman of the Friends of Langham Dome (FoLD), says ‘The dome will be a fitting memorial to those who served in it.’

Films, interactive games, a full pilot’s flying uniform, Morse key and an original WW2 radio will immerse the whole family in the incredible story of Langham Dome. Visitors can even follow in the footsteps of the trainees by testing their aim with an interactive training gun and one of the Dome’s original training films. The Dome’s interactive training gun and a case telling the story of local pilot, Jeff Rounce

Langham Dome was built in 1942-43 on the edge of RAF Langham and utilised ground-breaking technology to train anti-aircraft gunners. Moving images were projected onto the inside of the Dome to teach trainees how to improve their accuracy and level of success when shooting at enemy aircraft. In 2013, owners North Norfolk Historic Buildings Trust (NNHBT), in conjunction with the FoLD, won major funding from the Heritage Lottery Fund, as well as English Heritage and other contributors, to restore and transform the Dome.

The Dome will be managed by FoLD on behalf on the NNHBT, and spearheaded by the Dome’s Development Manager, Kate Faire. Staffed by volunteers, the centre is open Tuesday, Wednesday, Thursday, Sunday and Bank Holiday Mondays, 11am – 4pm. More information about opening times and admission fees can be found here.