No.521 Squadron went through two incarnations during the Second World War, in both cases as a meteorological squadron. The squadron was formed for the first time on 1 August 1942 from No.1401 Met  Flight, and was based at Bircham Newton (Norfolk). This incarnation of the squadron used several different types of aircraft. Gladiator biplanes were used for local weather reporting. Twin engined Hudsons and Blenheims were used over the North Sea. Finally faster Spitfires and Mosquitoes were used for flights over German occupied Europe.

The squadron was split into Nos.1401 and 1409 (Met) Flights on 31 March 1943, but then was reformed at Docking on 1 September of the same year. This second version of the squadron inherited the Gladiators and Hudsons, and also used Hampden bombers no longer needed by Bomber Command. The squadron moved to Langham in October 1944. The Hudsons and Hampdens were replaced by Venturas by the end of 1944, and the Gladiators were joined by Hurricanes from August 1944. A shortage of Venturas in front line units meant that they were withdrawn in the autumn of 1944. They were replaced by Hudsons for a short period, but were then replaced by B17 Flying Fortresses in December 1944. At the end of the war the squadron was operating a mix of Fortresses, Gladiators and Hurricanes, and had spent the entire war based in Norfolk before moving to RAF Chivenor in Devon at the end of November 1945, but leaving 1402 Met Flight operating THUM missions from Langham until the end of RAF flying operations with two Hurricane THUM flights on 30 April 1946 being the last operations of the Flight.

The Squadron was mainly involved in two types of sorties from Langham:

The dangers inherent in the Squadron’s operations in virtually all weathers can be illustrated by a couple of examples:

On 16 November 1944 Gladiator K.7972 flown by Pilot Officer W McKAY took off at 0525 from Langham on a THUM sortie – in darkness with the cloud base at 150ft. On his return, with the Langham weather unsuitable for an approach and landing, he decided to make a descent below cloud at Docking on the (radio) beam. Having descended to 50ft over the airfield and still in cloud (and darkness) the aircraft bounced badly on the aerodrome, and the pilot knew that his undercarriage was damaged. In a subsequent approach he crash landed at 0635. It was decided that there must have been an instrument lag in the altimeter as the pilot had made many sorties under similar difficult conditions with successful landings on the beam at Docking.

5 November 1944 Fg Off Churchill and crew. Take off 0400 land 0945. Mission RHOMBUS 1. The ascent was abandoned on this sortie. The whole trip was made in exceedingly rough conditions – gale winds and heavy rain as the area was covered by severe frontal conditions. The average wind for the whole sortie was 53 knots at 800 feet – reaching 73 knots at the highest. Icing was experienced at 950mb.

6 November 1944 Fg Off Stollery and crew.  Take off 0855 land 1455. No RHOMBUS was done by 521 Sqn. The aircraft was to have taken off from RAF Skitten (in Ciathness near Wick) but owing to severe frontal conditions over the whole area and icing it was cancelled by Group.

9 November 1944 Fg Off Stollery and crew. Take-off 1125 from Skitten – landed Langham 1505  – mission RHOMBUS II. Take off was delayed because the aircraft had to be cleaned after a heavy snow shower and a suitable break in the showers gave time to be airborne.  At position 3 on the route the A/C had to fly approx.70 miles south to avoid a very extensive snow storm and then course was set to position 2 on the second leg. At 550mb [equivalent to about 14,000 feet] the port motor began to throw oil and the climb was abandoned. Gale winds of 40-55 knots for the whole sortie.

Take-off had been delayed so that it would be daylight at the datum for the climb as there were extensive CuNb clouds and snow storms. On the ascent the GEE aerial iced up and broke off. Shortly afterwards the ASV aerial iced up and broke off hitting the starboard propeller. It damaged the propeller – an indent of 1” and bending the end approx. 3” from the end. At 15000ft the climb was abandoned and returned to base – engine vibrating badly.

7 February 1945 Fg Off Hinton and crew. Take-off from Langham 0415 – did not return – mission RHOMBUS I. The aircraft took off as normal. The weather was bad with heavy frontal conditions and a strong wind (35/40 knots). At 0615 an SOS was received from the aircraft and Kirkwall and Inverness obtained a 3rd class bearing. Nothing further was heard from the aircraft. The bearings gave an approximate position at Position 6 on the route [this would have been around 57.3N 05E]. On plotting the time flown the aircraft should have been commencing the ascent at the time of the SOS. Four (4) Air Sea Rescue Warwicks were airborne before 0900 hours and searched the area around Position 6, but no trace was found of the crew or aircraft. 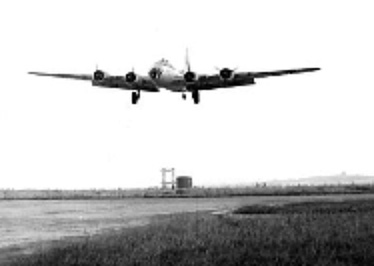