From Farm Field to Air Field

In just sixteen months, starting from November 1942, Langham was transformed from a simple grass landing strip to a ‘Class A standard’ airfield. Three concrete runways were built, long and strong enough to take the pounding of heavily laden aircraft as they took off and landed.

The construction work at RAF Langham was part of the great rash of airfield creation that erupted across the UK in 1942 – 43. At that point in World War 2, an airfield was completed on average every three days!

The image above, taken around the same time at another airfield in East Anglia is typical of the scenes that took place at airfield construction sites across the UK, including at RAF Langham.

Spaced Out for Safety

But RAF Langham wasn’t only runways. When active, there were dozens of different sorts of buildings across several sites – placed far apart for good reason. There were ten separate clusters of accommodation buildings in and around Langham village. This dispersal had a sensible but chilling reason: If the base was attacked, it would have been harder to destroy all the facilities and kill all the staff at once.

The strict hierarchy of the Royal Air Force (RAF) and Women’s Auxiliary Air Force (WAAF) governed life amongst the living sites at Langham. There were separate eating, sleeping, washing and toilet facilities provided for officers, for sergeants and for airmen or airwomen. Oddly, this division wasn’t as strict for the buildings on the airfield site itself.

Airfield staff used RAF-issue bikes to get from the living quarters to where they ate and worked. Local people remember seeing them with cutlery fixed to their belts on their way to the canteen. Lorries were also used to ferry the aircrews to and from the airfield.

At its busiest, in 1944 – 45, RAF Langham had more than 140 buildings. These ranged from aircraft hangars to bomb stores, workshops and latrines. Three concrete runways dominated the site, encircled by a perimeter road 3.4 miles (5.5 km) long.

Below are descriptions of a few of the 140 buildings other than Langham Dome.

The ‘Battle Headquarters’ (BHQ) was an underground set of rooms with a look-out post above ground. In an attack, this is where the airfield’s defence would have been co-ordinated. Most World War 2 airfields had this kind of structure. Few survive.

The Watch Office was the only tall structure within the perimeter road. From it, the staff had uninterrupted views of the airfield. Here they co-ordinated landings and take-offs, prevented air and ground collisions, and warned pilots about weather conditions.

The office’s original equipment included radio and signal lamps to communicate with air crews. Staff had weather recording instruments and teleprinters to receive weather reports. A microphone was also linked to the airfield’s loudspeaker system.

The airfield’s 17 toilet blocks required a proper sewage works – Langham’s first, which is still working today. These temporary brick latrines and the ‘ablutions’ buildings (for washing and shaving) were mostly unheated.

Just next door to Langham’s Dome Teacher was another training building – the ‘Bomb Teacher’. Aircrew learnt and practiced accurate bomb aiming in here. 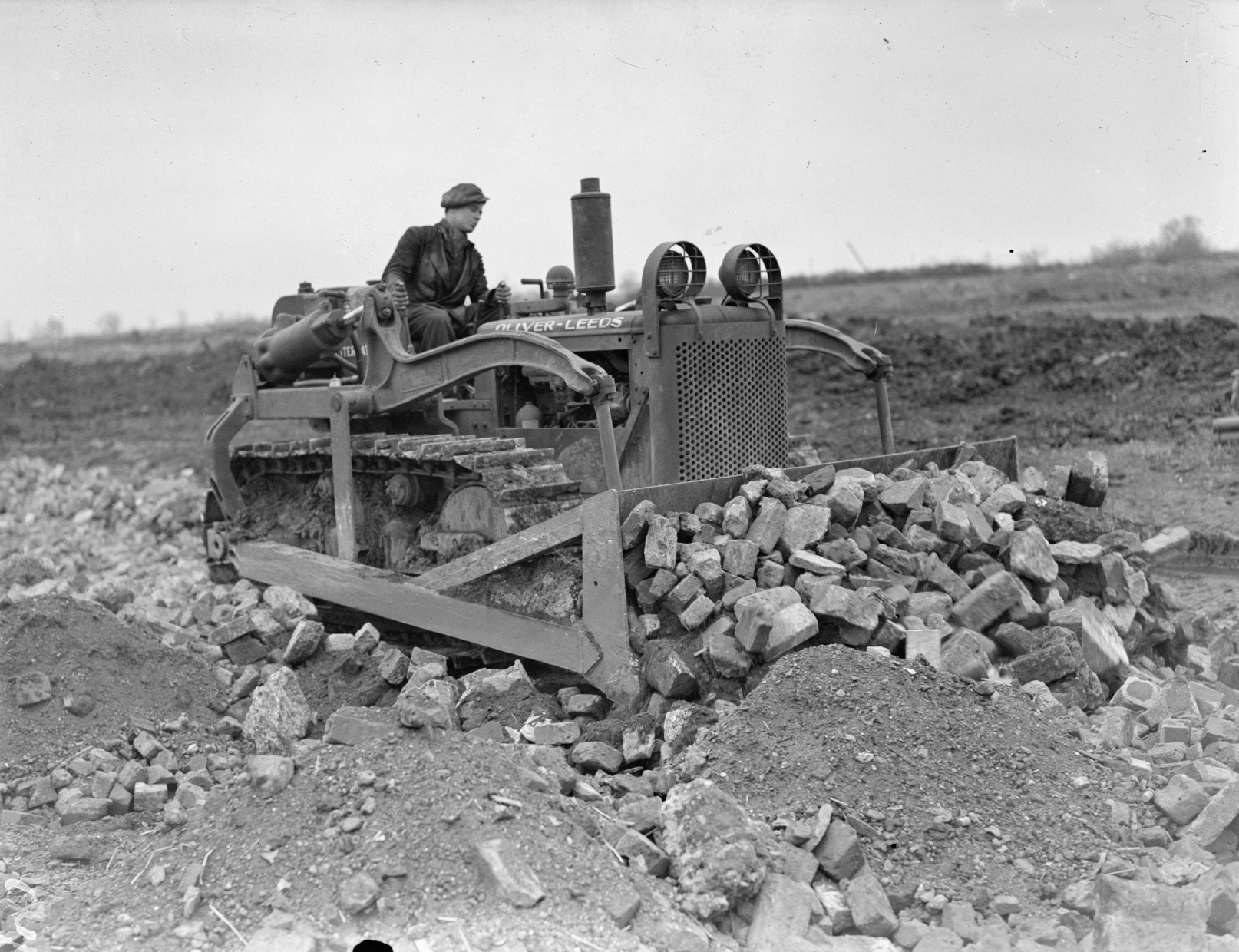 A bulldozer spreads bricks from bombed buildings as hardcore for the new runway during construction of the airfield at Witchford, Cambridgeshire. © IWM (CE 29). 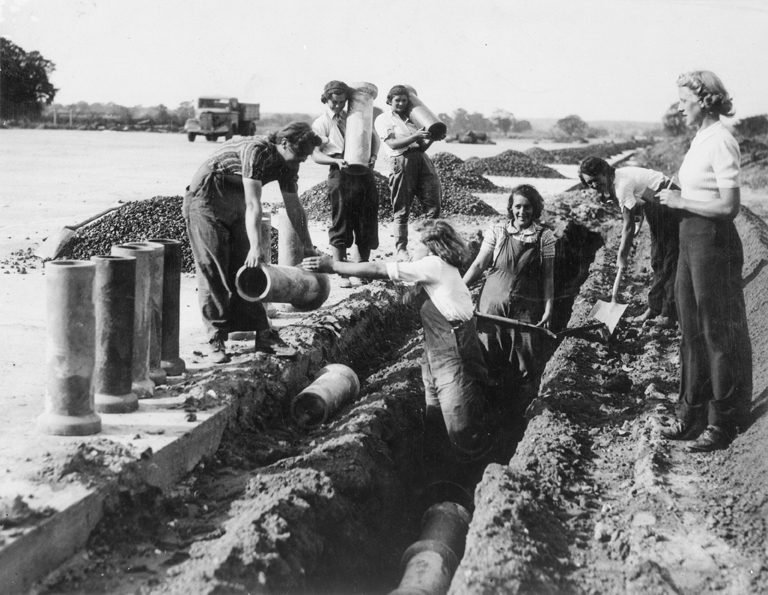 Building airfields was just one of the many activities women undertook during WW2. © IWM LN 4320 B. 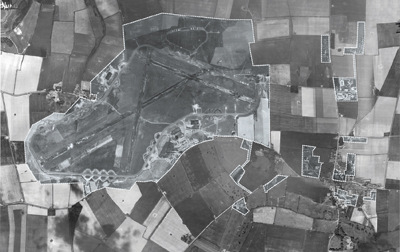 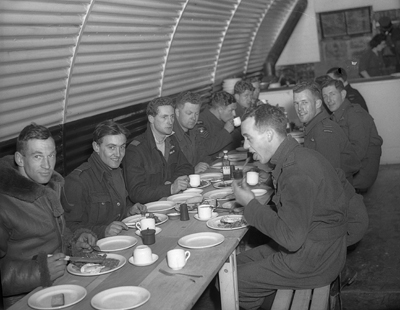 Crews from 455 Squadron eat breakfast after returning from an early morning attack (AWM). 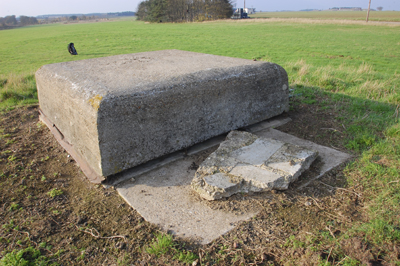 The BHQ look-out post, or cupola, as it appears today © Michael Tucknott. 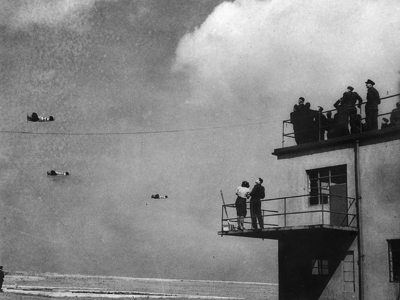 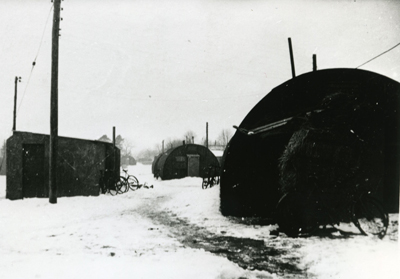 A view of a very draughty latrine block (left) at RAF Langham during the harsh winter of 1946-47. © NIMH. 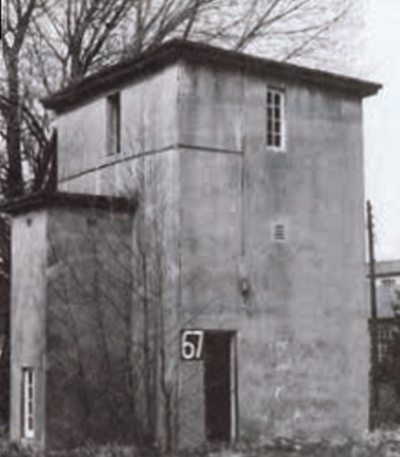 This image of a Bomb Teacher at Snaith shows what RAF Langham's probably looked like. © Airfield Research Group. 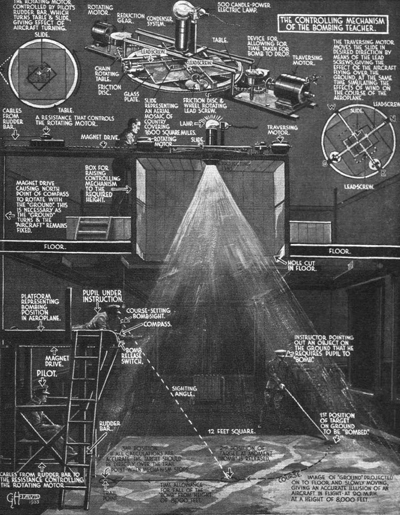 This cutaway illustration from 1934 shows how the Bomb Teacher building worked. © Flight Magazine, 1934. 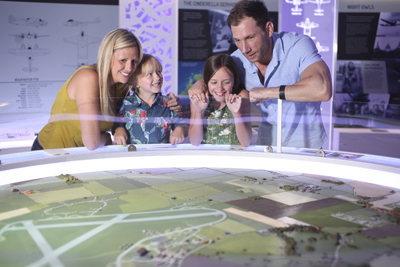 Visit Langham Dome and you can see an interactive model map of the Airfield and village as it appeared around 1944. © FoLD.