Their Blenheim, Beaufort and Hampden planes rarely attacked as a coordinated force and terrible losses were suffered as a consequence. When the powerful Beaufighter became available, new tactics were devised to use it against enemy shipping: their defences were to be swamped by Beaufighters attacking as a group. The ‘Strike Wing’ was born.

Strike Wings, Super Wings and Crews from the other side of the World

By 1944 these new tactics proved successful. In preparation for D-Day (the Allied invasion of Europe) the English Channel had to be cleared of all enemy shipping. In April, 455 Squadron of the Royal Australian Air Force (RAAF) and 489 Squadron of the Royal New Zealand Air Force (RNZAF) moved from their base in Scotland to Langham, to help in this task. Their crews were mainly from Australia and New Zealand – so they were known as the ‘ANZAC Wing’.

The ANZAC Strike Wing air crews were poised to fly out against enemy convoys, supply ships, ack-ack (anti-aircraft) ships and midget submarines – in fact, anything that moved along the Dutch and north German coasts.

More than once for important, large targets, the ANZAC Wing would be joined by Wings from North Coates and Strubby airfields in Lincolnshire, to make up a ‘Super Wing’. These ‘Super Wings’ could see as many as fifty planes leaving Langham together. Often they were escorted by a Polish fighter squadron from Coltishall in Norfolk. A typical mass attack against a large enemy convoy would involve aircraft attacking in two waves. The first would dive in with guns and rockets to attack the escort ships and the second with torpedoes aimed at the merchant ships.

Strike Wing attacks were exhilarating or terrifying – or both. The rockets and cannon fire made enemy ships’ gunners run for cover. But it wasn’t just the enemy who suffered. Despite effective tactics, losses among the Beaufighter Strike Wings remained some of the heaviest in the RAF.

In 1944, Germany had to rely heavily on coastal convoys of ships to transport crucial supplies and raw materials such as iron ore from Scandinavia. British and Allied bombers had managed to disrupt enemy overland transport systems – now the squadrons under Coastal Command were harassing and destroying them at sea.

To reach a working port, the convoy routes hugged the coasts of Norway, Denmark, northern Germany and the Netherlands. The enemy’s coastal guns could then provide extra defence for the convoys.

Even with their new tactics, fast aircraft and powerful weapons, the Langham squadrons faced great danger every time they went ‘on operations’. Enemy shipping was well organised and well-defended. Each merchant ship had two or three naval escort ships armed with all kinds of anti-aircraft (AA) guns. Many also flew barrage balloons on wires to deter attacking aircraft, and some even had a flamethrower at the mast head. The largest of these were the ‘Sperrbrechers’ (Mine-field Breakers).Heavily armoured to withstand sea mine explosions, they made for a formidable opponent.

The way Langham Beaufighters attacked meant flying directly towards and over the target ship. The gunners below, desperate to defend themselves, sent up streams of anti-aircraft fire and many planes were hit. Although some managed to limp home damaged, many did not return at all.

One of the Radio Operator/Observer’s jobs was to take photos after a strike, to see what damage they had done. Some of the planes also had a cine-camera mounted in the nose which filmed the squadron’s attack. The crews really needed to learn from their successes – and their failures.

By October 1944, the air attacks from Langham and the other Coastal Command squadrons had proven to be very successful. Enemy shipping convoys now dared to move only at night. They were then targets for the Wellington bombers who flew night sorties, also from RAF Langham. 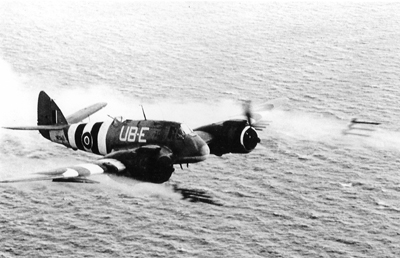 A 455 Squadron Beaufighter launching its rockets. By permission of Ian Gordon, Barralier Books. 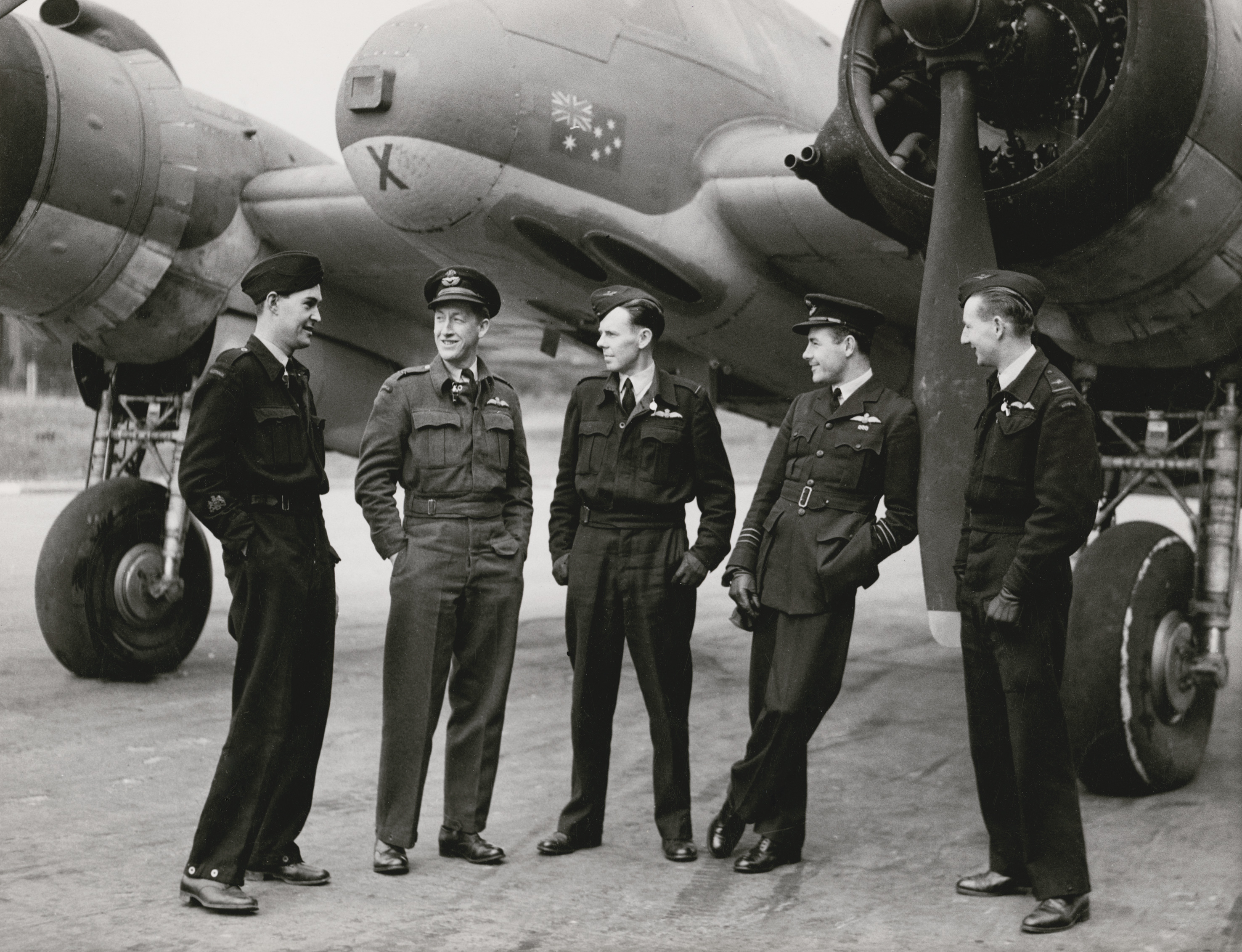 The ANZAC Wing at Langham (AWM). 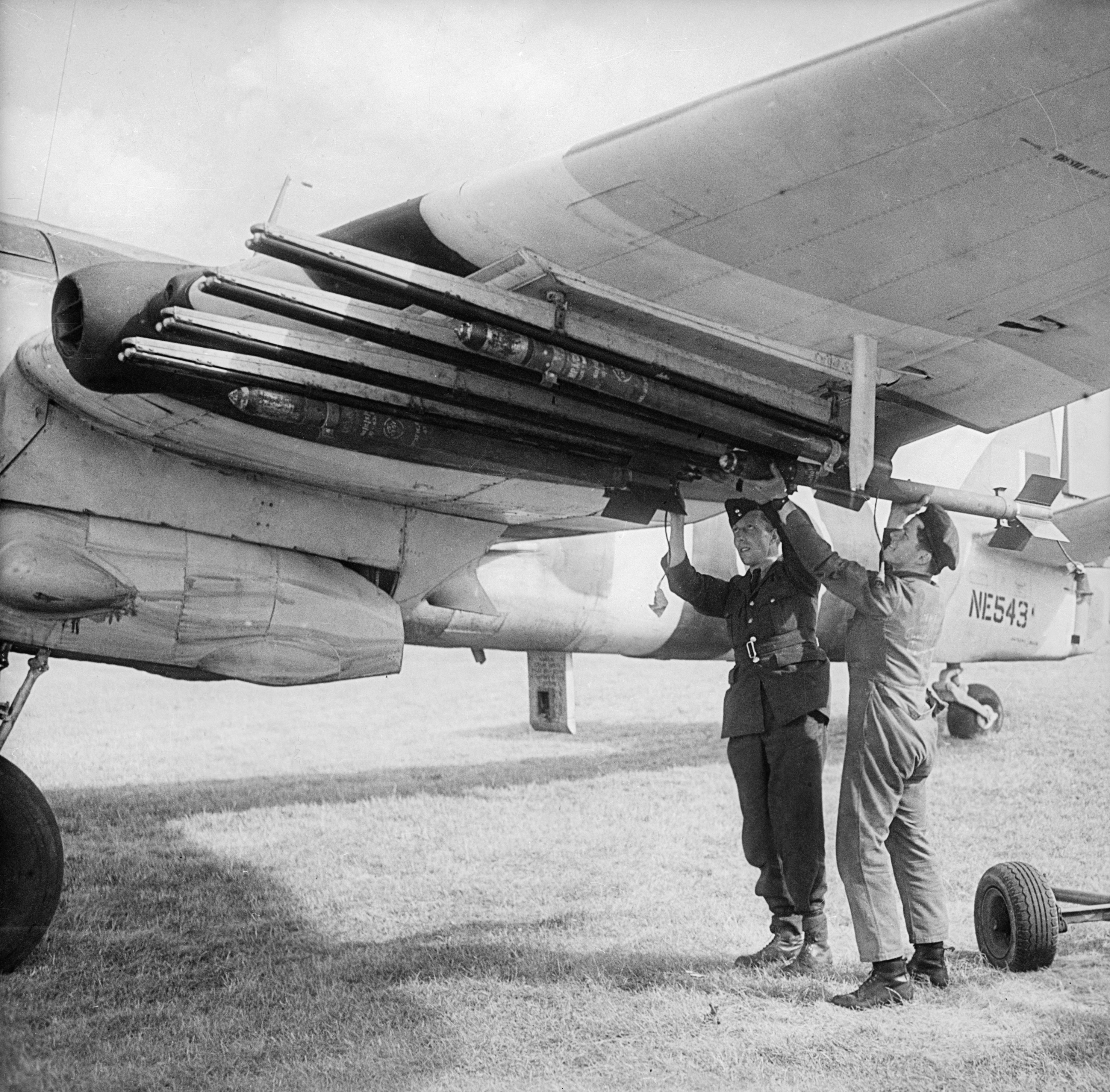 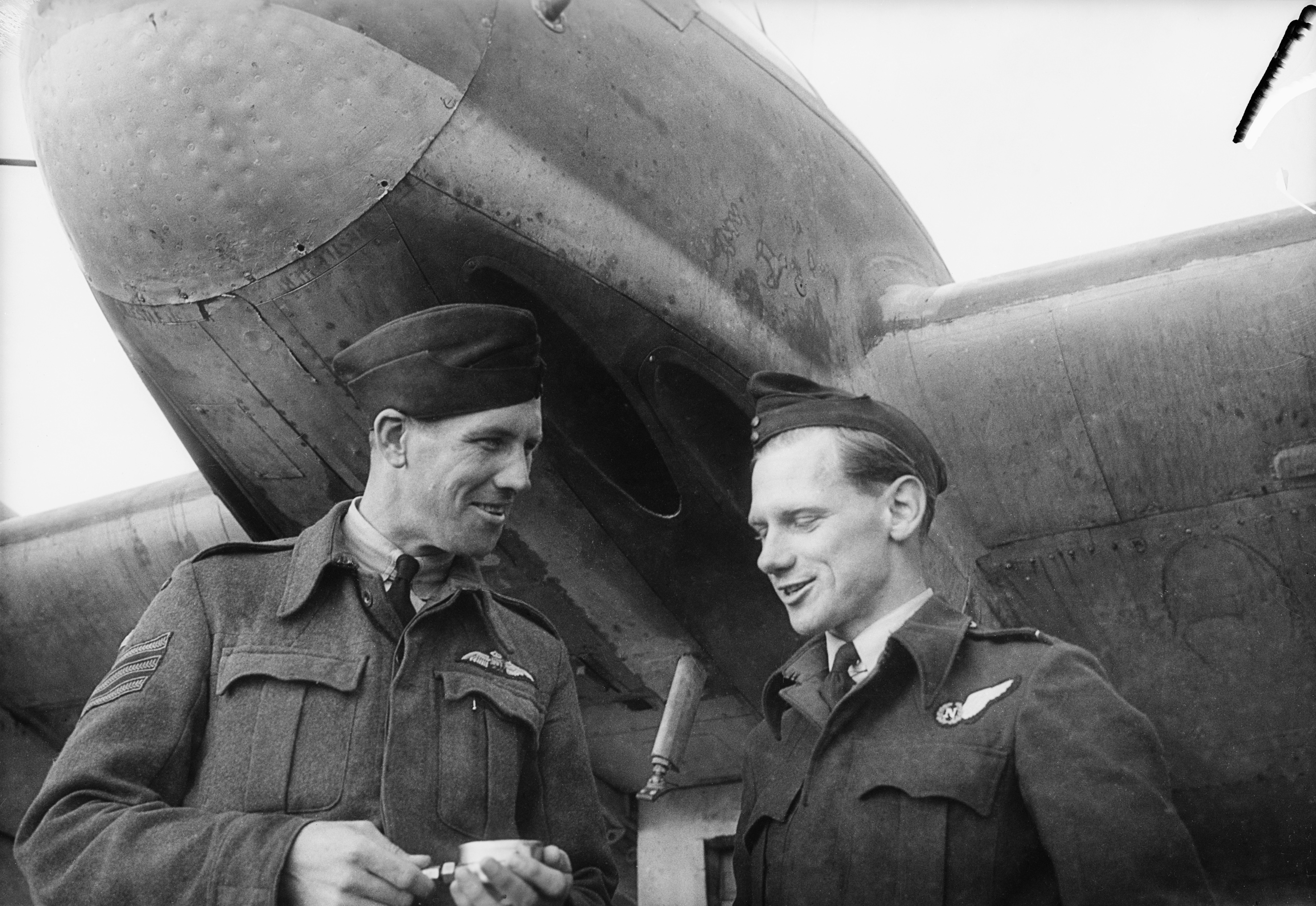 Pilot Norman Steer and his Navigator/Observer, Basil Roberts, were shot down off the West Frisian Islands. They were later seen in their dinghy but neither survived. The body of Flying Officer Roberts was found floating in the sea off south Norway. Pilot Officer Steer was never found (AWM). 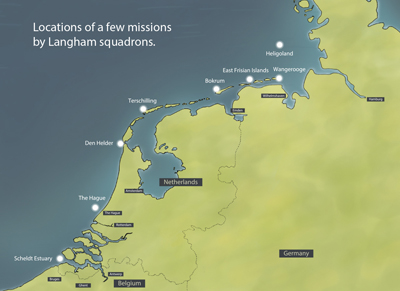 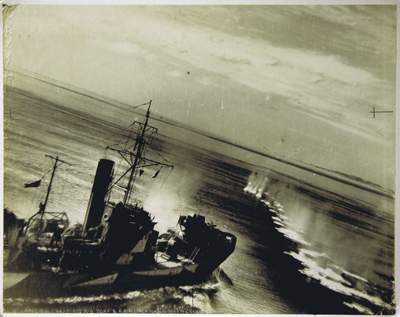 A pilots eye view of an enemy escort ship.The small white dot on the side of the bridge is in fact a 'kill' marking - an allied aircraft shot down by the ship. © Bert Osborn. 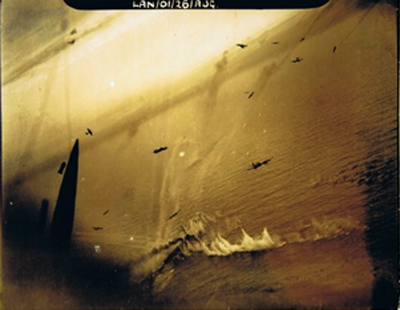 The combination of several squadrons proved to be a fearsome force. How many Beaufighters can you count in this image? © Bert Osborn. 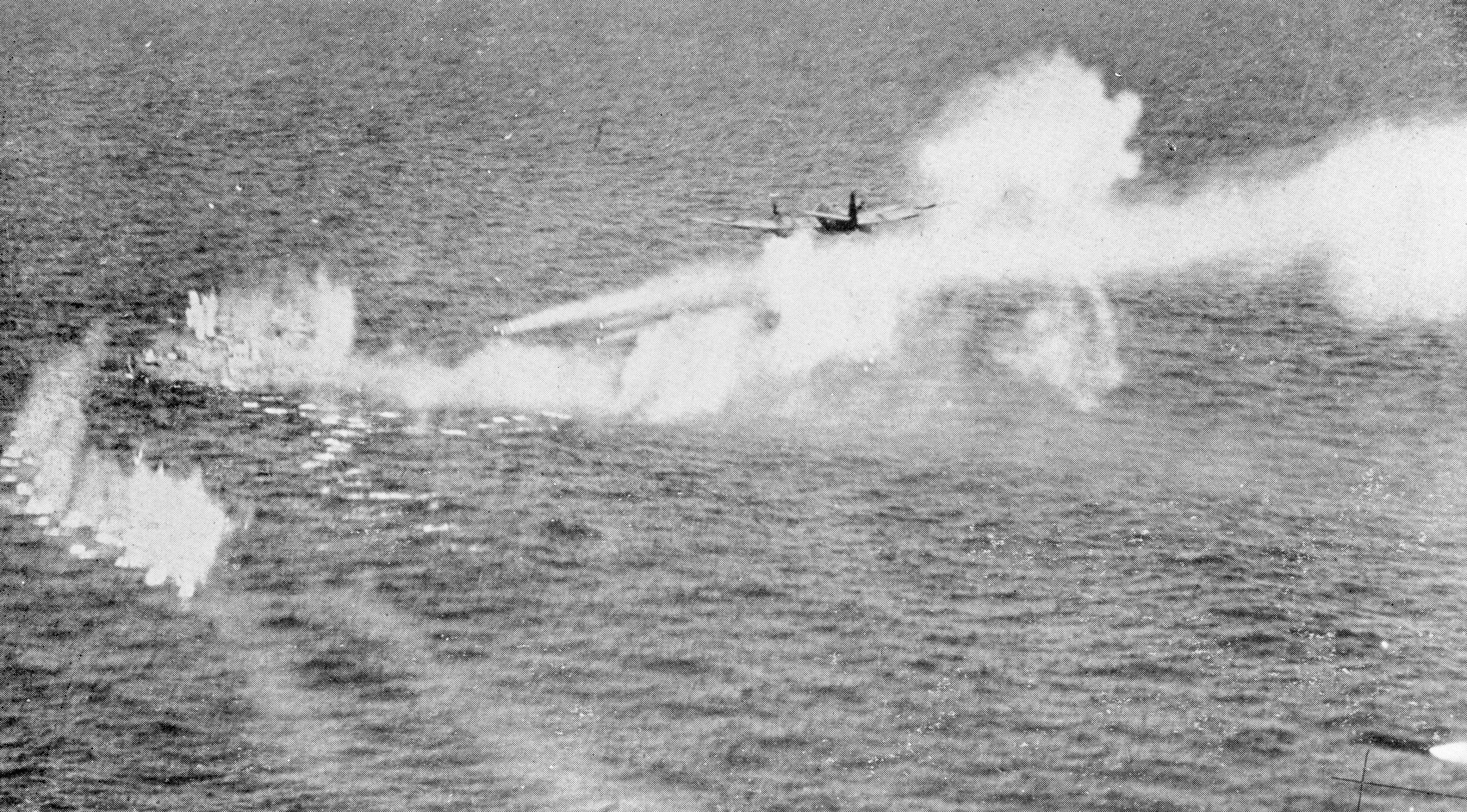 Langham Strike Wing operations lasted for six months. By October 1944 the enemy only dared move their ships at night. The ANZAC Wing returned to Scotland to continue daylight operations against the enemy in Norway (AWM).